Air Pollution and the Brain:Latest 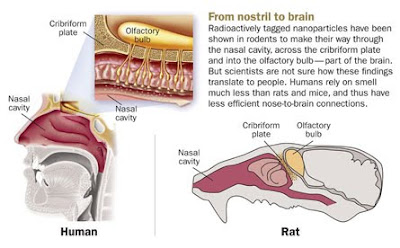 Destination brain :Tiny inhaled motes can travel beyond the lungs; new research suggests these particles may ravage the brain.
When Lilian Calderón-Garcidueñas recruited children for a study probing the effects of air pollution, Ana was just 7. The trim girl with an above-average IQ of 113 “was bright, very beautiful and clinically healthy,” the physician and toxicologist recalls.
But now Ana (not her real name) is 11. And after putting her and 54 other children from a middle-class area of Mexico City through a new battery of medical and cognitive tests, Calderón-Garcidueñas found that something has been ravaging the youngsters’ lungs, hearts — and, especially troubling, their minds.
Brain scans and screening for chemical biomarkers in the blood pointed to inflammation affecting all parts of the brain, says Calderón-Garcidueñas, of the National Institute of Pediatrics in Mexico City and the University of Montana in Missoula. On MRI scans, white spots showed up in the prefrontal cortex. In the elderly, she says, such brain lesions tend to denote reduced blood flow and often show up in people who are developing dementias, including Alzheimer’s disease.
In autopsies of seemingly healthy Mexico City children who had died in auto accidents or other traumatic events, Calderón-Garcidueñas uncovered brain deposits of amyloid-beta and alpha-synuclein, proteins that serve as hallmarks of Alzheimer’s and Parkinson’s diseases. Several years earlier, she had found similar abnormalities in homeless Mexico City dogs and exaggerated versions of the abnormalities in local 20- to 50-year-olds.
She has published studies linking the insidious changes to the metro region’s air quality. The area’s 20-plus million inhabitants make it one of the world’s largest megacities, a roughly 7,000-square-kilometer region choking with smog and particles containing carbon, metals and more (SN: 9/8/07, p. 152). Most are nanoparticles — too small to see but just the right size to migrate into tissues throughout the body. Further clouding the air are solvents and other reactive gases — as well as toxins contributed by livestock feces.
Scientists have known that air pollution can impair airways and blood vessels. The emerging surprise is what it might do to the brain. Increasingly, studies have been highlighting inflammation-provoking nanopollutants as a potential source of nerve cell damage.
Calderón-Garcidueñas has been correlating Mexico City’s stew of air pollutants with a suite of symptoms in people of all ages. In March in Salt Lake City at the annual meeting of the Society of Toxicology, Calderón-Garcidueñas unveiled some of her latest data. At age 11, Ana shows persistent, growing brain lesions, the toxicologist reported. As do the other Mexico City children surveyed. They also exhibit cognitive impairments in memory, problem solving and judgment and deficiencies in their sense of smell compared with age-matched children from a cleaner city 120 kilometers away.


Metals in the air Particles collected from the air above Mexico City (two shown) contain metals including manganese, iron, zinc, tin, lead and mercury (labeled). New research suggests that the particles can end up in the brain.Kouji Adachi and Peter R. Buseck/Environmental Sci. Technol. 2010
Other toxicologists at the meeting presented data, largely from animal studies, tracking the movement of billionth-of-a-meter–scale particles into the brain, where they triggered inflammation and abnormalities characteristic of Alzheimer’s or Parkinson’s.
Until recently, most air pollution toxicology has focused on impacts to the lungs and heart, observes James Antonini of the National Institute for Occupational Safety and Health’s lab in Morgantown, W. Va. The challenge now, he says, is to identify which pollutants are harming the nervous systems of Ana and others who live in areas with particularly dirty air.
Fuzzy thinking
Mexico City is not the only source of real-world pollution that has been linked to mental impairments.
Ulrich Ranft and colleagues at the Environmental Health Research Institute at Heinrich Heine University in Düsseldorf, Germany, studied 400 or so highly functioning local women in their mid- to late 70s. Elderly women who lived within 50 meters of very busy streets exhibited poorer memory skills than did women of the same age whose homes were well removed from highly trafficked roadways, the team reported in the November 2009 Environmental Research.
The study turned up no similar link between cognitive scores and average levels of particles in the women’s communities. That makes sense, Ranft says, because the levels of ultrafine motes emitted by traffic can be quite high along streets, “but drop off very fast, falling to almost background levels when you get just 100 meters away from the road.”
Young children’s minds may be especially sensitive to tiny airborne particles spewed by traffic, according to Shakira Franco Suglia of the Harvard School of Public Health in Boston and her colleagues. In studies of roughly 200 Boston 10-year-olds, the researchers found that those living in areas with the highest average airborne concentrations of soot, a pollutant primarily associated with traffic, had lower IQs and lower scores on memory tests.

From nostril to brain
The team divided the kids by exposure levels into four groups. The average IQ drop between one group and the next averaged about three points — comparable to that seen in kids whose mothers had smoked during pregnancy, Franco Suglia’s group reported in 2008 in the American Journal of Epidemiology.
Taking note of non-scents
A few studies, including the recent one by Ranft’s group, have also observed a somewhat impaired sense of smell among people living in polluted regions.
At the toxicology meeting, Calderón-Garcidueñas reported that kids and young adults in Mexico City have a somewhat worse sense of smell than those living in cleaner cities. Roberto Lucchini of the University of Brescia in Italy reported much the same for adolescents living in communities around now-closed iron-alloy manufacturing plants. Both groups’ data also turned up signs the youngsters have been experiencing at least subtle nerve damage.
The findings, the researchers say, are especially worrisome since a number of studies have shown that a sense of scents wanes in people developing Alzheimer’s and Parkinson’s.
Though metal pollution hasn’t been confirmed as a cause of these diseases, Lucchini was able to link pollution in Brescia to reduced smelling abilities and to motor impairments.
Until 2001, alloy plants in northern areas of the province spewed a number of metals into the air. Manganese remains a substantial pollutant in the air, soil and house dust in this part of Italy. Work by Lucchini’s team uncovered unusually high rates of symptoms including tremors, slowed movement and rigidity among adults living near the now-defunct plants. The local prevalence of these and other Parkinson’s-like symptoms is about 400 per 100,000 inhabitants. That’s two and a half times the usual rate in Italy.