It is really extraordinary that within months of preliminary opening "non-conforming waste" blew up the furnace at Lakeside.This is no banana republic,but if the system can let in propane gas cylinders (a very well known incinerator hazard) what else will it not let in.This is an appalling indictment of control standards in our newest incinerator licensed to burn radioactivity.

On this occasion the problem occurred during the commissioning trials which started in June 2009. In August 2009 some non-conforming waste containing gas cylinders was delivered in defiance of the plant’s tight specification for its waste acceptance criteria. Only municipal solid waste from collection rounds and some office and retail commercial wastes is contracted to be delivered into the Lakeside plant.

Unfortunately, the gas cylinders not only got into the Lakeside waste bunker but were picked up by the grab and fed through to one of the two boiler feeds to the furnace and exploded, causing damage which has had to be repaired. In addition, the whole bunker of waste had to be sorted to ensure that any other non-conforming wastes were eliminated. The plant will therefore not be fully operational until 2010, two years late.

Despite the fact that the site is only a few metres outside the Greater London boundary, only a limited amount of waste is going from London into the Lakeside plant. Waste is contracted to come from Wiltshire 120km to the west, Dorset 80km to the south of the plant and more locally from Slough and Berkshire. Clearly there is a need to rationalise waste movements within England in order to minimise the adverse impacts of the excessive and potentially unnecessary transport of waste…
Posted by No Incinerator FC at 09:41 No comments:

Nuclear waste moved off the agenda!

The government’s new draft National Policy Statement on nuclear power, indicating which issues the new Infrastructure Planning Commission (IPC) should take on board, and which it can ignore, contains this remarkable statement:
“The Government is satisfied that effective arrangements will exist to manage and dispose of the waste that will be produced from new nuclear power stations. As a result the IPC need not consider this question.” The draft statement goes on to say that: “Geological disposal will be preceded by safe and secure interim storage.”
So it seems, the waste issue is all in hand and we needn’t bother too much about it, or any problems with the much more active spent fuel that the new reactors’ high-fuel “burn-up” approach will create. Despite the fact that the highly active spent fuel is to be kept on site at the plant for perhaps several decades, that is evidently not something IPC will have to consider in its assessment of whether the proposed plants can go ahead. Instead the IPC will just focus on any conventional local planning and environmental impact issues that may emerge in relation to the 10 new nuclear plants that the government has now backed.
Quite apart from the issue of on-site spent fuel storage, there are plenty of other issues to discuss. For example, the risk of flooding in the years ahead, as climate change begins to bite. Dungeness was dropped off the original 11 strong list, due to local eco-issues, including, we hear, concerns about flood risks. That leaves the following, all of them also coastal sites, although allegedly less at risk: Bradwell, Hartlepool, Heysham, Hinkley Point, Oldbury, Sellafield, Sizewell and Wylfa, all existing sites, plus newcomers Braystones, and Kirksanton, both in Cumbria.
Friends of the Earth (FoE) nevertheless remains concerned: “The IPC is an unelected, undemocratic body – the new Commissioners aren’t directly accountable to the people their decisions will affect. It’s going to be very difficult for local people to get their voices heard, especially with key documents being so technical and opportunities to attend inquiries so few. If people are unhappy with the process they’ll have to take the matter to court, which is extremely difficult and costly.”
Here is another urgent and contemporary reason that nuclear waste has to be considerd by the Infrastructure Planning Commission (IPC)as part of its evaluation of the merits or otherwise of applications to build new nuclear power plants.
• When marine archaeologists in 1956 discovered the hull of the Vasa warship, submerged in the mud of Stockholm harbour since it sunk minutes into its maiden voyage in 1628, little could they have thought that this remarkable raising of the King Gustavus Adolphus’s flagship five years later in 1961 could scupper attempts to bury nuclear waste over four decades later
• As the British nuclear industry gears up to build a new fleet of nuclear reactors, the pressure to demonstrate a solution to the long term management of nuclear waste, its plans to adopt the Swedish system of nuclear waste disposal looks as if it might have hit the rocks.
• And what is making waves is the discovery that copper, the metal key to sealing-in the highly radioactive waste placed into the planned repository from the biosphere, corrodes. A new paper by several scientists at the respected Swedish Academy of Sciences (supported by Russian and Canadian colleagues) reports findings on their examination of the integrity of copper artefacts raised from the harbour mud after 333 years of being submerged. To their surprise they found that, from observation and analysis, contrary to accepted received wisdom copper corrodes, even when not exposed to oxygen.
• The Swedish Nuclear Fuel and Waste Management Company (Svensk Kärnbränslehantering AB, SKB) is charged with the responsiblity for the safety of the final repository for spent nuclear fuel. And may now have to return to the drawing board if copper proves an inadequate shieled to sheath the radioactively hot nuclear waste.• SKB’s chosen method of final disposal dubbbed ‘KBS-3’, and they have carried out technical research at its research facilities in Oskarshamn, in south east Sweden: the Canister Laboratory has developed encapsulation techniques and the nearby Äspö Laboratory uses its subterranean caverns to test rock suitablity and back-fill media.
• The high level radioactive waste will have to be emplaced for 100,00 years, the period over which the radiotoxicity of the irradiated fuel decays to become comparable to the radiotoxicity of the natural uranium used to produce the fresh nuclear fuel.
• Doubts also cast over suitability of underground emplacement in ancient bedrock due to volcanic activity over the period its would have to remain stably stored.
• It may well mean the current interim store, CLAB, adjoining the Oskarshamn reactor site, may have to extend its storage ponds, build forty meters underground, looking just like a set from a Bond film, as the storage ponds glow with an eerily manacing deep blue.
• The painstaking preparation work done by several scientific teams- even counting the numbers of ants, rodents, bats, deer and giant elk living in the candiate disposal area, may all go to waste. For the Swedish nuclear industry, this is an acute crisis, as it, like the UK, wants to add new reactors to a fleet that already prides nearly half Sweden’s power. The full multi-volume environmental impact assessment is due to be published in December.
• On Monday 16 November a colloquium will be held in Stockholm, bringing together some of the world’s best corrosion experts to evaluate the Swedish discoveries. The future of not just the Swedish nuclear industry, but Britain’s too could hang on what this scientific meeting
Posted by No Incinerator FC at 00:48 No comments: 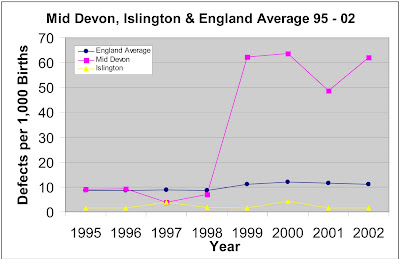 There is a serious issue about Falluja...it will be played out in the press...and possibly in the UN,if the Americans don't censor it as usual.

Of course its the depleted and undepleted Uranium...but it is ironic that,when wanting to squirm away from shells, a spokesman said it could be either radiation,chemicals or particulates!
The graph shows what happened to birth defects in Devon when an incinerator started up!