In a further deliberate attempt to disguise the real cost of incineration, and maintain the truly crazy drive to globalised companies' profits, the EU parliament continues the policy to ease controls on pollution measurments.WHAT'S TO HIDE ?? !!


The latest press release shows how ultra-fine particulates, dioxins and heavy metals are being made to "disappear".

They are even falling behind on their scurrilous "best we can manage" safety promise.They are refusing to measure with the latest technology.

How expendable do you feel?
Posted by No Incinerator FC at 03:05 No comments:

DOES IT MATTER HOW LONG YOU LIVE IN BAD AIR? 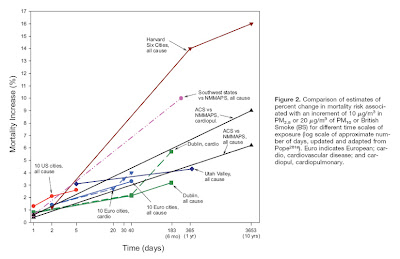 Does it matter how long you live in bad air?

Yes it does….the effects on pregnancy are seen immediately, i.e. delayed by nine months. Then you can see rises in ill health as the pollution levels last into days. In the last eight years or so a number of very long term studies have shown even higher levels of mortality the longer people have lived in bad air. You can see the mortality increasing till at least 10 years. One Dutch study showed a 20% rise in mortality.

British government figures on “safety” had one of those hidden assumptions buried away in them. That no one ever lived in one spot longer than five years…..you can see why they wanted to cheat on that one! Of course it is the most vulnerable elderly that stay put, and the poor who can’t move out of the polluted housing front line, whence all but they have fled.

If you've speny all your childhood in bad air...to age twenty...you never recover your lung capacity.This renders sufferers much more liable to serious problems earlier than otherwise..a sort of premature ageing of resilience.

Posted by No Incinerator FC at 09:29 No comments: 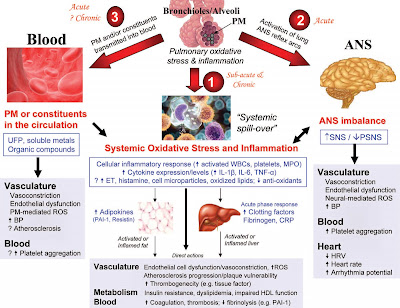 Air pollution, from traffic, industry, the new incinerator programme and summer ozone peaks doesn't sound sexy yet, but the first hot summer death peaks will be as devastating to denialists as the 2007 summer floods were to water engineers.


For example, why do you think that the government has gone to such great lengths to cover up its correspondence with Boris over London air?

Both the American Lung:

have new reports and position statements:

you could note the widespread immumne system disturbances ((illus.p2353) which explain the otherwise mysterious wide variety of effects, from pregnancy to brain damage.

Bloomberg show how badly London has been (and will be) doing in comparison to Athens and Frankfurt.


The article also highlights how the new measurement methods will appear to "reduce" air pollution. Same air, same awful mortality, just new, "fresh" numbers designed to fool the Eu commissioners into allowing further delays in cleaning things up.
You have reported the HOC environment audit committee report.....nothings changed though...traffic is still growing...and the number of incinerators and biomass burn stations in the pipeline is quite shoocking.

Did you know that only £ 10,000 pounds stands between reassuring or condemning research:

As Sahsu collects all these figures anyway, and modern number crunching computer systems can spot clusters a mile away, on auto pilot at no extra cost, why hasn't the HPA done, or allowed others to do, the research?
Thjis field is wide open for a Guardian special...there is a new minister for the environment...go for it Guardian!
Posted by No Incinerator FC at 06:21 No comments:

A recent article from Bloomberg's Alex Morales,shows London's dire position.It is available at:

Please note that he has noticed the trick of changing the measurement methods as a way of presenting the same air as "cleaner"...the mortality figures are of course still the same!!!

The WHO recommended figures would put the red exceedance line still lower,and thus show that we breathe dangerously polluted air for even more days of the year than are shown in the graph above.Birmingham's air is at least as bad.
Posted by No Incinerator FC at 03:49 No comments: