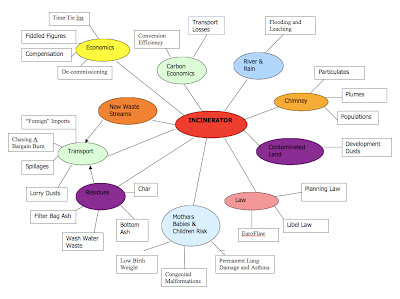 Download,print,scribble,connect....but enjoy would be too strong
Posted by No Incinerator FC at 06:11 No comments:

"Much of it lands in West Africa. An investigation by the Mail on Sunday found computers which once belonged to the NHS being broken up and burnt by children on Ghanaian rubbish dumps. They were trying to extract copper and aluminium by burning off the plastics, with the result that they were inhaling lead, cadmium, dioxins, furans and brominated flame retardants. Tests in another of the world's great fly-tips, Guiyu in China, show that 80% of the children of that city have dangerous levels of lead in their blood."

From George Monbiot's article in the Guardian today.

So the EU's WEEE directive is working then!

Soon all these good things will be on our doorstep too,its only fair to share.
Posted by No Incinerator FC at 01:10 No comments:

Simon Burkitt and CCAL have forced the government to release the truth about their sums for deaths from air pollution in LONDON under FOI.It does not make for pretty reading:

*** Using government spreadsheets and its current risk figures indicates there were around 5,000 premature deaths in London in 2005 due to dangerous airborne particles (PM10) alone ***

*** CCAL urges Mayor Johnson to apply the Precautionary Principle when developing his Air Quality Strategy and accept government recommendations for sensitivity analyses which suggest there may have been some 6,300 to 7,900 premature deaths in London in 2005 due to PM10 alone ***


“Ministers tend to say:
air quality is good across 99% of the UK’s landmass;
has improved a lot since 1990;
that people lose on average a maximum of seven to eight months of their lives due to the problem;
and the alert bands show air pollution as being mostly ‘low’ or ‘moderate’.

The real picture is quite different.

1.No-one lives in our fields and mountains; they live alongside the 1,117 kilometres of roads in London (2,496 kilometres nationally) forecast by the government to breach legal standards for nitrogen dioxide (NO2) in 2010.


2. Air quality has improved since 1990 but the level of dangerous airborne particles (PM10) in London has increased at a mean rate of around 0.4% per year since the late 1990’s despite public health laws requiring sharp reductions.


3. London has the highest annual mean concentrations of NO2 of any capital city in western (or eastern) Europe.


4. Rather than talk abstractly about an average reduction in life expectancy across 60,975,000 people, Ministers should warn people that the amount of time lost per statistical victim due to dangerous airborne particles may be 9.8 years.


5. Air quality can be in the 'low' band all year round but still breach European Union (EU) limit values.”


So,into this very real mess,the local councils intend to force through new sources of particulate pollution,from new waste streams.The continuing denial about how bad London's air is already,how many people its killing,how many childrens' lungs are being damaged and how many pregnancies ruined JUST WILL NOT DO!
Posted by No Incinerator FC at 14:58 No comments:

Young children's exposure to lead in the environment is harming their intellectual and emotional development, according to UK researchers.

The researchers say the toxic effects of lead on the central nervous system are obvious even below the current so-called safe level of lead in the blood.

They are recommending the threshold should be halved.

Lead has been removed from paint and petrol by law in the UK, but it is still widespread in the environment.

The Bristol researchers took blood samples from 582 children at the age of 30 months.

They found 27% of the children had lead levels above five microgrammes per decilitre.

They followed the children's progress at regular intervals and then assessed their academic performance and behavioural patterns when they were seven to eight years old.

1.With lead levels up to five microgrammes per decilitre, there was no obvious effect.

2.But lead levels between five and 10 microgrammes per decilitre were associated with significantly poorer scores for reading ( 49% lower) and writing (51% lower).

3.A doubling in lead blood levels to 10 microgrammes per decilitre was associated with a drop of a third of a grade in their Scholastic Assessment Tests (SATs).

4.And above 10 microgrammes per decilitre children were almost three times as likely to display antisocial behaviour patterns and be hyperactive than the children with the lower levels of lead in their blood.


You may remember the Avonmouth smelter post below.....so Bristol are sensitive to this area of contamination.You may also remember how blase the English authorities are about measuring heavy metals,and think the problem is over for London. The map above,from Hull,shows the widespread extent of potential plumes.

Well, this research proves its not over....and that all those other heavy metals,mercury in particular,will make it all very much worse.As usual,the children are most vulnerable.....the researchers are beginning to reccommend that paediatricians start taking blood level tests of Lead again, and all that "hidden" contaminated land is just as important as ever.
Posted by No Incinerator FC at 08:59 No comments:

A coroner’s jury, last week, found that a soldier from IRAQ1 contracted cancer from depleted uranium in theatre. To do this they decided that the model of radiation damage proposed by the MOD was wrong, and that a model of internal radiation damage proposed by Professor Busby was to be preferred. Together with the Corby limb deformity decision of a month ago, the case adds to set a series of legal precedents about the effects of inhaling uranium, heavy metals and dioxins. This makes any refusal to measure heavy metals and dioxins near hazardous waste incinerators irresponsible and failing to set up public health monitoring around them grossly negligent. The HPA case for no research is now untenable, in my opinion. No doubt there will be appeals, but please bear in mind the opinions of the judge over Corby and a jury over cancer. It is not eccentric or foolish to believe that incinerators can be hazardous, either through their chimney emissions or their waste residues. The burden of proof and guarantee of safety now definitely resides with the commissioning council and the developer, and they can’t prove anything without measurement.
Posted by No Incinerator FC at 14:38 No comments:


THE MASTER PR CONJURERS FROM LONDON


What do their flower filled booklets and clean presentations want to draw your eyes away from?

a) Immediately,like vehicles, cause and worsen asthma in children and heart and lung problems in adults.

b) the heavy metals, dioxins and any radioactivity affect pregnancy outcomes.

c) Over the lifespan of the contracts many more serius diseases will occur.

What can you do about this? Join the Greens, FOE, Greenpeace, UKWIN….write to your MP….put it on your neighbourhood group agenda…write to the newspapers. New planning regulations have come in recently that mean your voice will count for very little, very soon. This totally fraudulent consultation process shows just how easy it is to park an incinerator on your doorstep…and say that that’s what you chose.
Posted by No Incinerator FC at 02:21 No comments: