A Tragi-Comedy in Several Parts 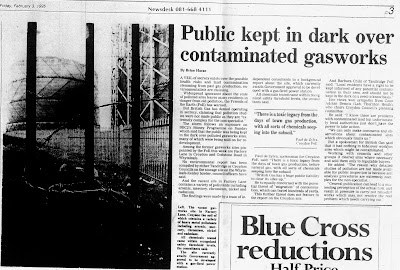 Foe Croydon (Paul de Zylva):
“There is a toxic legacy from the days of town gas production, with all sorts of chemicals seeping into the subsoil. British Gas has a huge public liability to clear its sites up." ( Independent consultants had identified arsenic, mercury, chromium, nickel and cadmium…but no mention was made of the complex hydrocarbons and dioxins guaranteed to be there as well).

British Gas:
“We have nothing to hide over work on sites which might be contaminated. We only sell them to reputable buyers. The reason why detailed studies of pollution are not made available for public inspection is because soil analysis procedures are extremely complex for the non-specialist. General publication can lead to a misleading perception of the actual risk, and result in pressure to carry out remedial works which may not resolve the real problem." (!)

Foe Tandridge (Barbara Child):
"Local residents have a right to be kept informed of any potential contamination in their area, and should not be kept in the dark on a need to know basis." ( Godstone Road, Whyteleaf)

Sir Paul Beresford ( Central Croydon MP and junior environment minister):
“The friends of the earth campaign has been alarmist and irresponsible. It’s not fair on people living nearby and makes me really cross. Perhaps they are having a go at me because I am an environment minister. I insist that there are adequate safeguards to make sure that once-polluted sites pose no danger. The information is complex. If you go to a doctor he might give you a prescription, but he doesn’t explain the complicated details of the drug." (really? some doctor!)

Some years later…..time having passed by…..the greater understanding of particulates.....dioxins..... The Corby Judgement…..the 2007 graph of early neonatal deaths is published by Croydon PCT (see below)…..new developments around Factory Lane…new residues from new incinerators to deal with.

the audience feels its going backwards to the future !?
Posted by No Incinerator FC at 06:46 No comments: 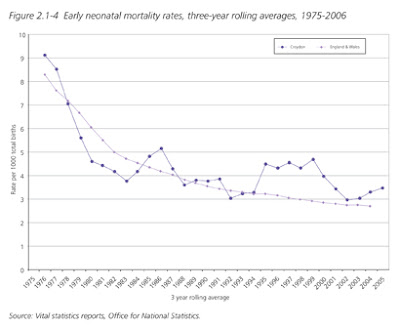 LORRIES,CHIMNEYS and A DUTY OF CARE

There is no doubt that air pollution from cars and lorries contributes to the causes of birth defects and low birth weight, in a general way. Last week the Corby judgement proved that special lorries carrying special cargo did the same, in a very spectacular way.
Birth defect, low birth weight and infant mortality increases around incinerators have almost always been attributed to the chimney emissions, and only one study looked at vehicular traffic and incinerator emissions together. It found that as road traffic increased, so did birth defect rates, in proportion. Birth defects near those incinerators were also raised,the nearer the more.
Croydon’s own figures on congenital malformations are ( for whatever reason) not being made publicly available, though they are collected and sent to the Office of National Statistics. A graph of early neonatal mortality (within 7 days of birth) is the nearest we can get to this important area.
As you can see above, Croydons own impressive improvement is suddenly halted by a peak in the early eighties,and a number of other peaks follow.The 1994-2002 looks very serious, and is almost coterminous with the period that Croydon often featured at the top of Londons PCT figures for birth defects, shown in Dr Ryans research .This is not commented on or explained in the document (Croydon Child Health 2007).
As Croydon Council seeks to embark on commissioning a variety of incinerators don’t you think that a special study of Croydons traffic pollution (particulates especially),the power station emissions, the Factory Lane dusts,Beddington lane dusts, land reclamation dusts and incinerator dusts is absolutely essential.One senior Italian researcher expressed the opinion that he thought it totally irresponsible to commission new waste facilities without including public health monitoring as mandatory.You will look in vain for this in the first and second SLWP consultation documents.
In view of the serious expense of litigation, isn`t it imperative that Croydon Council does not lay itself open to accusations of gross negligence, as did Corby,whatever the SLWP decides?The population of Corby is about 53,000….the area affected by the incinerator plumes and road movements could contain nearer 500,000.
In this split between each of the four boroughs,the SLWP and the final contractors,where will the legal and financial responsibility for compenstaion rest?
Posted by No Incinerator FC at 10:32 No comments: