How to fly a pyrolysis incinerator under the planning radar……
And then let the aliens breed a new colony!

"whereas smaller sites can be located amongst housing or
industrial units and use the heat generated locally. EPI have sited their
pyrolysis plant in a current waste treatment area, which underpinned
their business model and helped during the planning process.


EPI has a series of small modular pyrolysis units up and running
outside London. The Committee visited a test site on an industrial
estate in Mitcham. It has a single processor unit, which can process
8,000 tonnes of waste a year. Up to four other units could be added
on to the site to process 40,000 tonnes per year which is the average
waste requirement for a borough. This would produce enough
electricity to power an estimated 7,000-10,000 homes. This size of
plant would require around 3,000 sq ft of covered space and a smaller
version could be developed for use near to large buildings such as
sports centres and hospitals, which can use both the heat and power
produced. The long-term plan at Mitcham is to sell heat to other
units (such as a 24 hour bakery) on the estate.
The benefits of this process are that as the waste is not burnt, more
energy is captured than through the incineration process, there are no
harmful emissions, the process is odourless and virtually noiseless. In
addition, the size of the operation meant that recent planning
applications for 40,000 tonne plants had been approved in 12 weeks.
The plants are not subject to Environment Agency regulation as they
are considered low impact and therefore local authority environmental
health departments are responsible for granting the facilities a permit.

No Harmful Emissions!? That will be a first…I would definitely like to see the peer reviewed research on which such a statement is based.

The Residues?....pyrolysis (which is an unalterable chemical process,like gravity is for physics )produces some of the most carcinogenic residues known to man.
Posted by No Incinerator FC at 09:00 No comments: 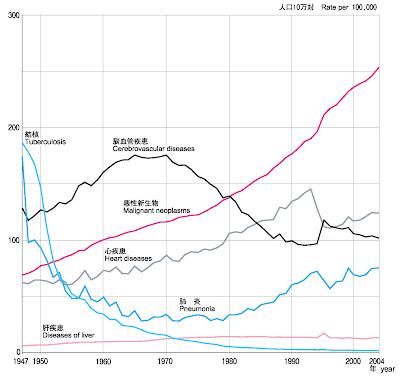 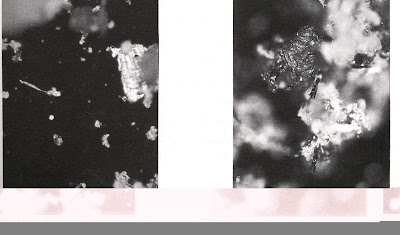 Where did the Mushroom Clouds go?....What happened next?


The latest decision by government to allow low and very low level waste to go into landfill blows a chill wind over the whole incinerator issue.

There isn’t much (probably 50 yards) between that and burning the stuff. There are at least three London incinerators already licensed to do that, with appropriately high infant mortalities downwind…Beddington could join the club!

The microscope picture above (from Treatment and Conditioning of Radioactive Incinerator Ashes) shows how the radioactive metals go up the chimney and condense in the cold air outside. Because of the tonnages involved even filtering will fail to prevent significant amounts of radioactive metallic “snow”.

Although the American occupying authorities removed all the morbidity and mortality data for the five years after the bombs, and prevented Japanese research, the graph shows the catastrophic growth in cancers as a cause of mortality in subsequent years.

An onsite nuclear physicist said he thought that the refusal to count the immediate deaths from fall out dusts dramatically reduced the numbers, but hid the truth.
Posted by No Incinerator FC at 01:53 No comments: